The old footings plus about a quarter of the old brickwork were retained, so I laid about 2100 bricks.

The bond was Flemish (and it's true that it's difficult to make both faces of a garden wall neat using this bond - so apologies to the neighbours opposite whoever you are for the unevenness on your side), with new flettons used for all the headers, and (initially) the remaining whole bricks from the old wall reused for the stretchers. Reusing the old bricks proved to be a bad idea as they are about 1/4" longer than modern bricks and very unevenly shaped, so fitting a mixture of old & new bricks together was difficult. In the end I switched to using new Cranleigh Light Multis for the stretchers and for the capping course. I discovered too late that the small oval frog in the Cranleighs meant that the capping course needed a lot of extra pointing, where had I used flettons with an angular frog extending all the way to to the 4 corners much less pointing would have been needed.

The mixture of bricks used has resulted in a chequerboard pattern which I like - a whole wall of flettons would have been much cheaper but would have had an unpleasant plastic-looking sheen.

The bricks were sourced as follows :

I was surprised to find that all the flettons were different designs. On a major project one should presumably obtain all the bricks in one go to ensure that they matched, although storing them would be a problem.

The old wall had been pushed over by 3  large trees (2 sycamores and a lime) against it. The new wall includes a 4-foot long bridge over the roots of one of the sycamores, built using 2 6-foot pre-cast reinforced concrete lintels. I did not want to fell the trees - although the tree 'surgeon' subsequently made such a mess of trimming the big sycamore that I now regret not felling and replanting with something smaller like apples (ie still big enough to sling a hammock). But the big lime belongs to my neighbour who is an absentee landlord & untraceable, so this one had to stay anyway.

The mixture for the mortar was

I used an old tile cement bucket as a measure (5 litres to the brim = 2 parts). 1x25kg bag of cement = approx 21 litres = approx 8.5 mixes. Each mix of mortar was enough for about 20 bricks, and took about 90 minutes to lay including preparatory work such as washing the bricks, mixing the mortar by hand, measuring up, etc. Total man-time must have been about 200 hours, between March 2000 and August 2001 (but not the winter months). 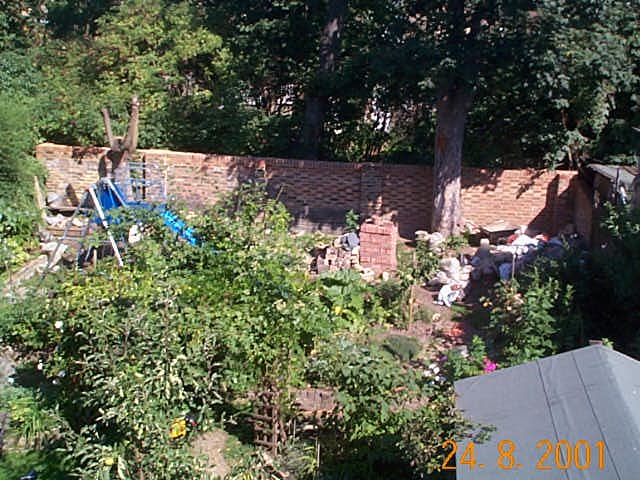 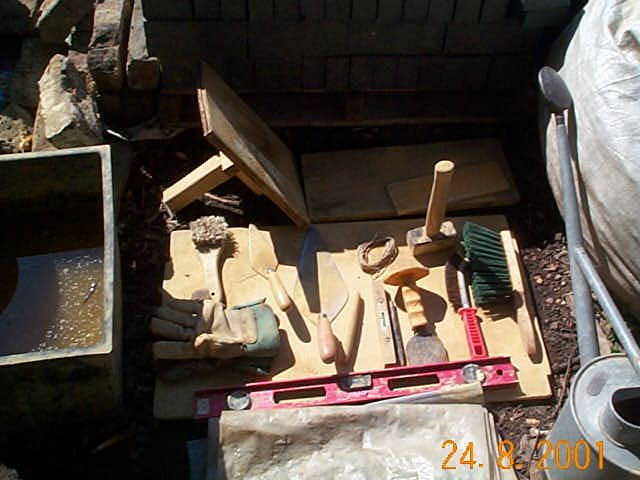